Blog / What is Ad Viewability?

What is Ad Viewability?

Marketing ROI What is Marketer

Viewability is the ability for an advert to be seen by a human. So, as you can imagine it’s pretty important for marketers. If your ad isn’t being viewed by a real person, then it’s not going to be effective — and that translates to wasted ad spend.

In this blog, we’ll cover what specifications an ad has to meet in order to be viewable, why it’s important for marketers to measure their ad viewability, and a few of the reasons why an ad might not be viewable. Read on to find out more, or check out our video on viewability here: Check out our video on what ad viewability is

What is ad viewability?

Ad viewability is a measure of whether or not an ad has the chance to be seen by a real human.

For an ad to be viewable, it must meet the minimum standards set by the Media Rating Council, and should not include bot traffic or other forms of ad fraud. 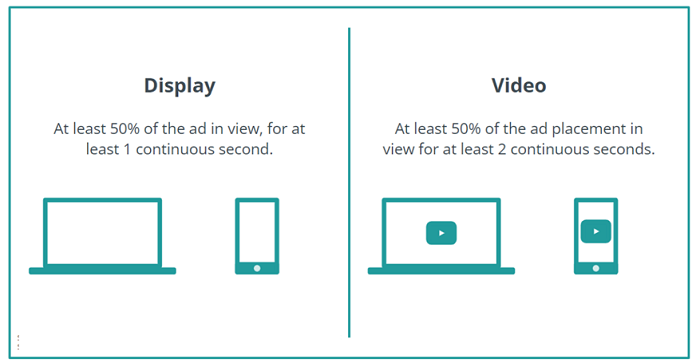 Display vs video standards for viewability

How to calculate ad viewability

You can calculate the viewability rate as a percentage by dividing the number of viewable ads by the number of measured ads and multiplying by 100.

To learn more about measuring ad viewability, check out our blog "How to Measure Ad Viewability: 5 Metrics and 3 Common Pitfalls"

Why does ad viewability matter for marketers?

Ad viewability can help you understand why ads may not have been effective. If an advert couldn’t have been seen by a human, then there’s no chance that it’s going to deliver against your campaign goals. In short, viewability is a necessary precondition for an effective ad campaign.

Understanding your ad viewability will enable you to reallocate ad spend to partners and ad formats with higher viewability rates. This in turn can help drive conversions.

Why would an ad not be viewable?

So, why would an ad not be viewable? Well, there are two types of reasons; environmental factors and consumer interaction factors.

These are to do with the environment in which your ad is served, for example:

Stuffing multiple ads into one pixel is similar to ad stacking, and it occurs when a normal-looking ad includes a pixel that is “stuffed” with multiple ads. The pixel is invisible to the naked eye.

These factors depend on an action taken by the consumer, for example:

What counts as invalid traffic?

Invalid traffic (IVT) is impressions generated by bots or other fraudulent advertising activity. All forms of IVT present a risk to advertisers by allowing impressions to be served where there is little to no chance of a real person engaging. Not all forms of IVT are malicious, but all have a detrimental effect on an advertiser’s campaign.

IVT breaks down into 3 categories;

General Invalid Traffic (GIVT): this includes crawlers and bots, basically any traffic that’s not coming from a real human. For the most part, these can be spotted by their behaviors, such as switching between websites every ten seconds. Fraudulent traffic like this can be identified through routine means of filtration; known data centers and bots or spiders, etc.

Reduced Value Inventory (RVI): Fraudulent traffic that reduces the quality of the ad impressions through acts such as incentivized browsing.

By pinpointing channels and platforms, and ad formats that are less prone to IVT or environmental, or consumer interaction factors that eat into your viewability rate, you can better understand why ads aren’t performing well, and optimize your budget to serve ads with a higher viewability rate.